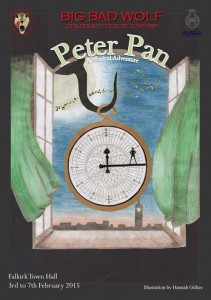 Tickets for performances of Peter Pan a Musical Adventure at  Falkirk Town Hall – February 3rd  to 7th 2015 are now available to the public from 1st  November 2014.  You can purchase them from the Steeple Box Office, Falkirk, tel-01324 506850. Tickets are £10 and £8 concessions (no concessions on Saturday evening)

Following on from the sell out success of Seussical. Big Bad Wolf Children’s Theatre Company return to FTH for their 2015 production of Peter Pan A Musical Adventure.

The legend of Peter Pan has been delighting children (and their parents) for well over 100 years and this musical adventure version is perfect for the whole family. Come and join Peter and the Darling family as they are whisked away to the famous Never Land: full of colourful characters including the Lost Boys, Tiger Lily and, of course, the dastardly Captain Hook and his sidekick Smee.

Peter Pan: A Musical Adventure is a musical based on J. M. Barrie’s play Peter Pan, or the Boy Who Wouldn’t Grow Up, with a book by Willis Hall and music and lyrics by George Stiles and Anthony Drewe.

The Big Bad Wolf Children’s Theatre Company will bring to life the magical world of Never Land with its spectacular scenes of flying, swashbuckling and sheer fantasy. Peter Pan is guaranteed to bring out everyone’s inner child, and send you soaring “Just Beyond the Stars.” 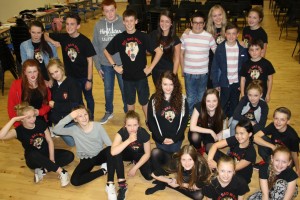 After an extremely busy weekend of auditions Big Bad Wolf are proud to announce the cast of their eighth annual production- Peter Pan which runs from 3rd to 7th February 2015 in Falkirk Town Hall. Thank you to everyone who auditioned and congratulations to those who received a part. Casting is as follows