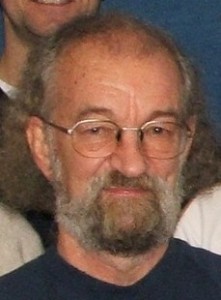 Big Bad Wolf’s Design Consultant Mike Benzie sadly passed away after a long period of illness on July 15th 2013. A former set designer with Falkirk Children’s Theatre, Mike initially came on board with Big Bad Wolf for their very first production- Aladdin in 2008 bringing with him a wealth of talent and inspiration. Sadly ill health forced Mike to take a back seat but not before he passed his vast experience on to Hilary Wallace who continues to this day in the role of set designer. She remembers….

“When I first met Mike at the workshop- with his joggers, woolly hat, long curly hair and beard he seemed to belong to an era of art teachers that is no more! He probably thought I wouldn’t hang around long enough in the cold of the workshop; however he set me to task and after seeing my capabilities was happy to let me get on with the painting. Under his guidance that first year of my involvement (Beauty and The Beast- 2010) I was given my most valuable art learning in years. We spent many an afternoon working together and building a friendship- quite a lot of fun was to be had-sometimes at my expense! Mike’s talent was not just with the overall look, but was also with the careful technical details- things that I will only ever dream of.

My second year Mike was unwell and passed the design and workshop overseeing to myself- giving me the confidence to take it on telling me I was able. He still went over my designs and helped me on the technical side of things. He was well enough to come and see the set on stage (The Wizz – 2011) and to my relief he was happy with it. For the last two years Mike was well enough to come back to the workshop where he still allowed me the task of designing but offering me advice when needed. It was great having him back and I loved having the mentor in my artistic learning that had been missing for so long. Mike helped me fulfil a dream of working with stage sets and gave me the opportunity and confidence to do this and I am now on my fourth show. I only had the chance to learn a tiny amount of Mike’s skill and knowledge in the short time I knew him. The wonderful sets that have become such a part of Big Bad Wolf shows are down to Mike’s hard work and dedication. Whenever he was pleased with my work his praise was “Aye that’ll do it” and I am hoping that during this next production of Seussical the Musical I still might hear them echoing from my unassuming wee mentor”

Mike Benzie’s artistic talent and flair will continue to influence future Big Bad Wolf productions as he set a standard of excellence that has become synonymous with this company. His attention to detail and his vision of how a stage should look was second to none and we were proud to have him as part of the team. He will be sadly missed.

2 Responses to Memories of Mike Benzie

This site uses Akismet to reduce spam. Learn how your comment data is processed.

Subscribe to our RSS feeds and connect with us using the Social Bookmark links below: