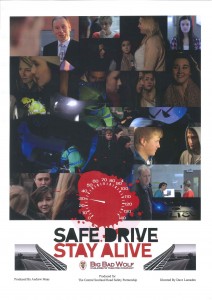 Big Bad Wolf Children’s Theatre Company members and their families participated in the production of a new road safety film as part of the Safe Drive Stay Alive campaign.

Gordon Pryde, SDSA co-ordinator and group community safety manager at Central Scotland Fire and Rescue Service said, “Road crashes are traumatic for everyone involved, from the victims and their families to the emergency service personnel attending.  Since the campaign started in 2007, we have completed 66 shows, reaching thousands of potential young drivers.  There is no doubt SDSA has a huge effect on the pupils and our hope is that they will remember what they have seen and heard when they take to the roads themselves and drive more safely as a result.”

Input from A&E nurses, disabled victims and their families, ambulance, police and fire service personnel and a funeral service presided over by a real chaplain all help drive home the message.

This site uses Akismet to reduce spam. Learn how your comment data is processed.

Subscribe to our RSS feeds and connect with us using the Social Bookmark links below: